How to … send a container from Peru to Germany in 2022 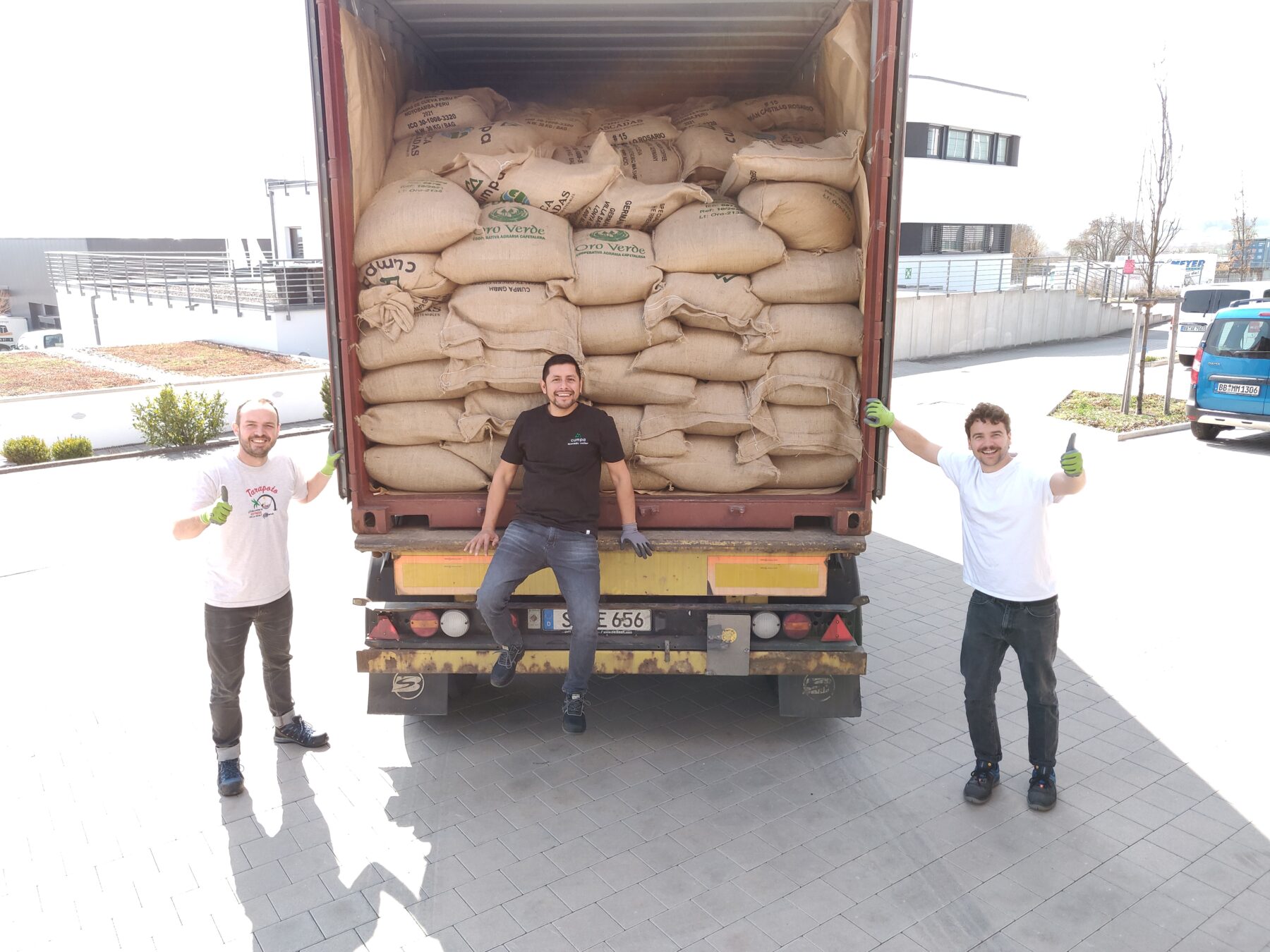 After a long wait, we were able to receive a shipment of fresh Peruvian coffees in our warehouse last Monday. Finally. In the container, 12 tons of microlots shared space with 7 tons of cooperative lots. After we already told you more about the lots in the container here, we want to bring some more transparency about the current difficulties in global logistics with this article.

Actually, our container was supposed to be shipped already in December. How could it happen that it only reached us at the end of March, about four months later?

The pandemic has turned the global logistics industry upside down. The reduction in capacity at shipping companies did not reflect the reality of a world in quarantine. Many people ordered consumer goods from the comfort of their own homes, rather than enjoying the rewards of hard work on a voyage as they were accustomed to. At the same time, more and more restrictions from the trade war between China and the U.S. have come into effect. Bundled together, this has resulted in too many container ships calling in the U.S. and a shortage of ships in the Asian region. All over the world, there was a shortage of empty containers as vessels for maritime transport, while container ships were piling up outside U.S. ports. This crisis situation continues to this day.

In Peru, we usually ship from Paita, a port in northern Peru. This is where the many agricultural products of northern Peru are usually shipped, coffee, cocoa, mangoes, avocados, but also oil and ores. Since 2021, there have been no containers here at all. Coffee had to be stored first inside, then outside the port area. There were thefts and robberies. The situation came to a head. We had to change our plans quickly.

Thanks to good friends, we were able to find a loading agent in Lima who found us a container space. In return, the container with coffee had to be driven to Lima. On the usual trip from Moyobamba to Paita – which Lukas has also taken by truck – winding roads lead once from the jungle up into the Andes and then down again on the coastal side. It is the notorious “Carretera Fernando Belaunde Terry”. Again and again there are crashes, accidents, falling rocks and landslides on the serpentines. Now it got even worse, and the coffee had to drive the “Carretera Fernando Belaunde Terry” in the southern direction first several hundred kilometers through the rainforest before it could cross the Andes towards Lima. During the truck’s journey in January, a bridge was then damaged in the rainforest. The truck with cumpa coffee stood around for two nights waiting for repairs, we missed a ship and had to ship from Lima a week later.

The shipping went well at first. The sea was calm and we hopefully followed the tracking. Then Putin’s army invaded Ukraine, NATO countries imposed extensive sanctions on Russia. Besides death unspeakable human suffering, this also had an impact on global logistics. Europe’s ports were already groaning during two years of pandemic, and now more chaos erupted. Biting nails, we had to watch in tracking as the ship carrying our coffee anchored off Rotterdam for over a week. Ships with goods from Russia, for Russia or ships under the Russian flag were now ghostly standing around everywhere. This was also the case in Hamburg. At the end of February, however, our coffee finally arrived in the port of Hamburg.

We already had an arrival date for mid-March, then we faced another damper. Again, our container had been selected for a drug check, which is done by X-ray. By the way, this fun is always paid by the importing company. From the drug control we went to the train station, from there to Stuttgart and then by truck to our warehouse in Herrenberg. After more than four months of travel, the container finally arrived at the end of March. Two months later than planned and four times as expensive as in 2020.

Nevertheless, the joy and relief is huge. It was especially great that Jimmy from Peru was able to help unload the container. He had coordinated the production and export of the coffees in Peru at the end of 2021, now he also saw the arrival at the loading ramp. What a trip!

See all articles
um zu blättern
info@cumpa.de +49 (0)7032 28986 00 Newsletter
Detailed information on the handling of user data can be found in our privacy policy.